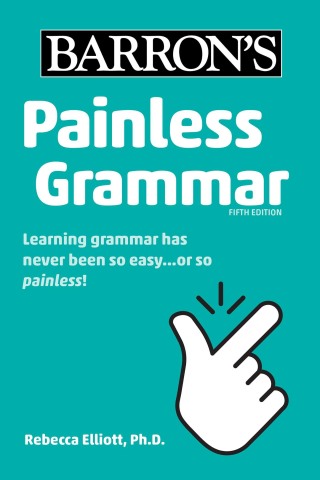 Rebecca Elliott: About the Author
Rebecca Elliott, Ph.D. earned her Ph.D. in clinical psychology from the University of North Carolina at Chapel Hill. After eight years of practice as a psychologist, she decided to pursue a double career becoming, as she says, “a therapist in the mornings and a farmer in the afternoons.” She opened a landscape nursery, and from there, she pursued her home gardening with vigor. Rebecca then turned her passion for horticulture into a writing career. She became a columnist for multiple gardening magazines, writing in an informal, witty style in an effort to translate the often-esoteric body of horticultural information into user-friendly language for the novice. Rebecca wanted to utilize her user-friendly writing style to make grammar and punctuation rules clear (and as painless as possible) for her then middle-school-aged son. Painless Grammar was a success, and it inspired Barron’s to publish the first of many books in the Painless Series.

About the Publisher
In the 1930s, Manuel H. Barron opened a bookstore in Brooklyn, New York.

People from the community asked Mr. Barron about books that might be available to help their children study for the New York State Regents exams. After realizing there wasn't anything available, Mr. Barron created his own study guides.
80 years later, Barron's has helped millions of people prepare for their next step.